Although it’s vital to support young men to make sense of images of sexuality that are largely devoid of meaningful relationships, and to encourage them to be mindful about how much time they spend online, when we work with boys in schools one of the topics that incites the most animated discussion is both much closer to home, and far less likely to usually be raised as worthy of discussion — parenting.

Perhaps there’s an assumption boys won’t be interested in exploring what it might mean to be a father. After all, as little boys they are far more likely to have been given an action figure to play with than a baby doll. TV tropes have long had us believe dads are a bunch of disinterested, bumbling slackers (from Fred Flintstone through to Homer Simpson).

And despite the rise of more dad-friendly commercials (an advertising trend known as “Dadvertising”) the vast majority of messages we receive about parenting still feature mothers as the nurturers and primary caregivers.

The reality is though that thankfully more men are choosing to defy convention and take a more active role in their children’s lives. Men like Labor MP Tim Hammond who resigned from Parliament this week by confessing, “I realise this is very unexpected news. But as much as I have tried desperately, I just cannot reconcile my life as a Federal Member of Parliament with being the father I need — and want — to be to my three children.”

And men like the fly-in fly-out miners in North Queensland who have recently signed up to “Hair 101 For Dads”, a workshop being run by to help fathers learn how to do their daughter’s hair. Lucas Vidler, a coal miner, told local news reporter Zarisha Bradley, that as he is away working for six months ever year, when he’s home he wants to be as involved as possible: “A lot of dads don’t know how to do hair and often we have to do the (school) drop-offs…(in the past) I’ve dropped my daughter off with some pretty average hair.”

For those young lads who don’t have a father present in their lives, opportunities to connect with good dads are particularly valuable. Earlier this year a pastor in Dallas, Donald Parish Jr., put out a plea on Facebook for men who could act as male mentors for the students who didn’t have a dad to bring to the High School’s “Breakfast with Dads” event. “We know that the majority of our students were not going to have dads present,” Parish told USA Today. “Many students don’t have any males figures around, or at least the kind who would show up for a school event like this.”

The school had hoped for 50 fathers. On the morning of the event, 600 fathers, uncles and grandfathers lined up to help out. One of the volunteers, Assistant Chief of Police Jason Rodriguez, took to Twitter afterwards to share how moved he was being involved, “Powerful to see a community of fellow men and fathers come together to wrap their arms around or (sic) young men.”

I saw how life-changing it can be for young men to be connected to positive father-figures first hand at the conclusion of a mentoring program I once co-ordinated for young people at risk.

I asked one of the teen participants what he’d most enjoyed about the six months he spent working alongside a plumber, Paul, who had acted as his mentor. I had expected this lad might mention some of the construction projects I knew they had worked on together, but his reply was far more poignant.

He said, “Every morning we’d get in the van and first drop off Paul’s son to the lady who would mind him. Paul would get his son out of the car seat so carefully and talk to him so kindly. He’d kiss his baby goodbye and tell him how much he loved him.”

“I’d never seen a man do anything like that before”, he continued, “and I want to be that man too one day.”

When boys grow up to become involved dads, everyone wins.

This post was originally published in The Daily Telegraph, 5/5/18 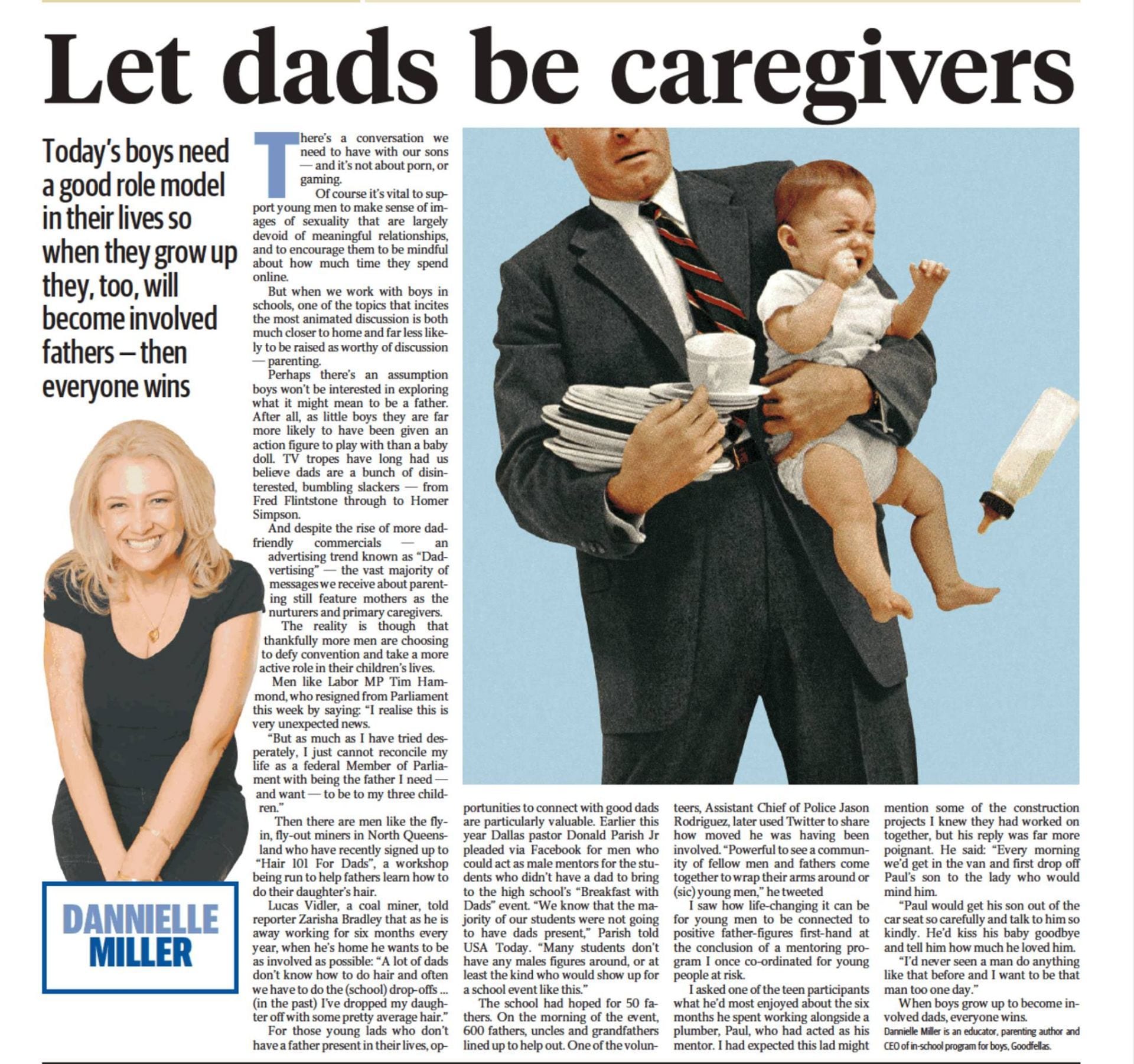