Mental health issues are taking a terrible toll on our teens.

But it’s time we also acknowledged the damaging ripple effect carrying the burden of worrying about their suffering friends may be having on their peers too. Because while it’s encouraging that young people are asking each other “are you OK?”, if the answer to that question happens to be “no”, what are kids meant to do with this information?

Make no mistake, there are plenty of young people out there currently serving as inexperienced, unqualified counsellors to their highly vulnerable mates. In fact, a struggling adolescent is actually more likely to first talk about their problems with a close friend before reaching out to their own family. And often, the conversation will be couched as one expected to be kept private; “Please don’t tell anyone but …”

For teens on the receiving end of a disclosure that a friend is struggling, there may well be a reluctance to pass on their worries to an adult for fear of being accused of betraying a confidence; secrets are a particularly powerful form of social currency for teenagers and often shared to solidify friendships.

Through my work in schools, I have in fact noted a generation burdened with feelings of responsibility for the mental health and safety of their inner circle. In a misguided attempt to maintain their friend’s confidence, often teens acting as a support person will struggle alone. “I guess the best I can do is just to be there for her, ” one 15-year-old girl told me. And thanks to the always-on social media world our teens inhabit, the support is often delivered 24/7. She concluded: “Whenever she feel like hurting herself, she calls me first and I talk her through those feelings. It actually is really stressing me out, but I can’t let her down. She told me if it wasn’t for me, she’d want to end it. I am so scared something bad will happen to her if I don’t respond to her messages.”

Some young people are, however, at least reaching out anonymously to seek direction in knowing how to support friends they are worried about.

Kids Help Line, a telephone counselling service for young people, recorded almost one thousand calls in 2017 alone from kids concerned over the mental health of someone they know. Over half of these related to concern that their friend was suicidal (Kids Help Line are in fact so highly aware of how prevalent this concern is that they offer downloadable resources on this topic, front and centre on their website’s homepage).

Jaelea Skehan, director of Every Mind (one of the organisations behind the latest mental health #youcantalk campaign) explains: “There’s a lot of young people holding heavy stuff for others. Being a good friend is about reaching out and checking in on our friends, but it is also about recognising when we aren’t equipped to manage complex issues and involving professionals who do have those skills.”

We need to very clear. Yes, we can talk. However, young people urgently need to be reassured that reporting concerns they hear to trusted adults is vital — and isn’t a betrayal of their friend’s trust.

How can we break this message down for them?

I teach teens that we should never keep dark secrets for people. When a young person begins talking to me and says something to the effect, “I want to tell you something but you must promise not to tell anyone.” I respond with the following; “You may tell me anything. And I will listen with my whole heart. But if you have been hurt, or could be hurt, I want you to know that I care too much about you not to do something about that.”

All young people need to know that reporting concerns to trusted adults is not a betrayal. Rather, it shows the depth of their compassion and bravery.

Tools to know how to best manage the conversations they are having are also important to share with our kids. They don’t need to solve complex issues, but simply acknowledge their friend’s feelings and tell them they care. They can also gently point out the consequences of their friend’s actions, for both themselves and the people that care for them. And if their friend has been hurt, or could be hurt? They can support their mate to get the professional help they deserve.

Teens should also be encouraged to take care of themselves during this process. They can reach out and debrief with a trusted adult if they are feeling overwhelmed or anxious by what they’ve been told (this is particularly important as we know that suicide can have a contagion effect on vulnerable youth).

By caring for themselves too, these accidental counsellors will be modelling for their mates that while sharing with those closest to us is a helpful first step, healing comes from also talking with professionals.

This OpEd was first published by The Daily Telegraph, 11/8/18 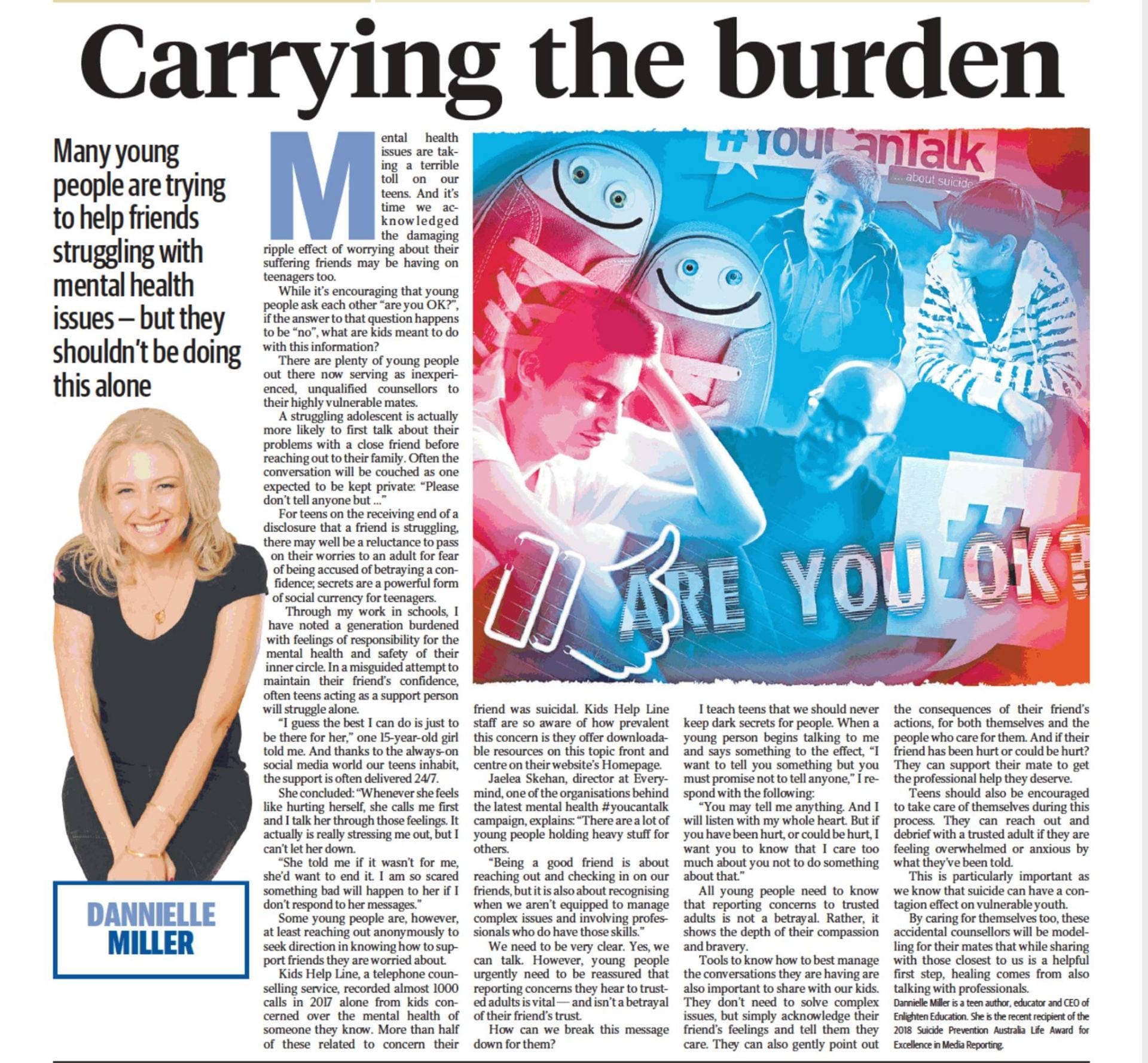