I loved the post below by the talented Ms Clementine Ford so much that I asked her permission to share it with you all here. Clementine describes herself as a “freelance writer, broadcaster and troublemaker based in Melbourne”. She tells me she “enjoys cups of tea on stormy summer afternoons, men with beards and the collected works of Nancy Mitford.” You can read more of her work at http://www.clementineford.com.au or follow her on Twitter @clementine_ford.

This piece first appeared in Sunday Life for Fairfax Media on January 15, 2012.

What’s wrong with ponies and dolls? How did “girl” become an insult? It’s time to reclaim the power of pink. 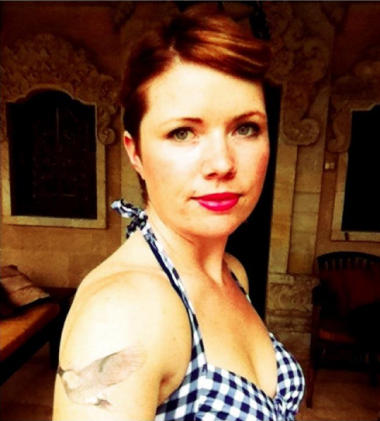 When I was about 15, my family undertook the latest in a long line of relocations and wound up in the northern suburbs of Adelaide. My first week at school culminated in a non-uniform day, and I carefully selected an outfit that I felt would best display my casual demeanour and keen sartorial skills. This turned out to be a pair of Tencel jeans, a dusty-rose chenille cardigan and an incongruously matched choice of Adidas street shoes.

As I sat there in science class draped in layers of fug, year 10’s It girl turned to me and said admiringly, “Nice shoes! I’m guessing you’re into Triple J.”

“Yeah,” I replied, trying to sound nonchalant. “I’m pretty into it.” Inside, I basked in the glow of her compliment. I spent the rest of the day casually hoicking up the silky folds of my jeans so everyone else could spy my shoes, while desperately hoping they wouldn’t discover the truth – that I hadn’t ever listened to Triple J.

How quick we are to embrace the lure of social currency. I was reminded of this recently when feminist author Emily Maguire sent me a copy of her contribution to a Women of Letters literary salon, the theme of which was “A letter to the person I misjudged”. In achingly grand prose, Maguire (author of Your Skirt’s Too Short) travels through a series of apologies to the girls she met along the road to adulthood: her fellow kindergarteners, whose ironed bows and frilly socks drew her withering disdain; her middle-school friends, on whom she turned her back when presented with the first taste of male validation; and finally her high-school friends, and the limits they put on themselves by assuming that their adventurous forays into adulthood were the domain of men and thus all the more brazen.

Maguire’s letter solidified something that has bothered me for a long time: namely, the tendency of some women to enthusiastically distance themselves from what are seen as typically female attributes and interests in order to elevate their own worth. I’ve noticed an increase in women speaking of their childhood inclination for boys’ toys with an unconscious pride, as if a past dedication to Tonka trucks makes them more evolved than those who served tea to their My Little Ponies and made their Barbies have sex. But what’s so interesting about a truck?

This all comes down to the unquestionably limited way in which society has constructed girlhood. Consider the marketing of children’s toys. Girls are encouraged to bake pink cakes in pink ovens while realistic pink babies wee on their frilly pink dresses. Meanwhile, the boys are out preparing for their eventual roles as Masters of the Universe by roaming the countryside dressed as firemen and superheroes.

Is it any wonder that smart, savvy women with multidimensional personalities – that is, most of them – would seek to distance themselves from these tropes? We’ve all gone through a period where we’ve announced loudly that, of course, most of our friends are boys because we just seem to get on better with them. We wear it like a badge of honour. Boys build the world while girls are expected to decorate it. They have to be sexy without being too sexual, smart without being too smart and in need of protection without being too needy. The world does not respond well to women who look at these tiny boxes and ask for a little more wiggle room.

But it’s a double-edged sword. Despite wanting them to conform to those stereotypes, society doesn’t like girls very much. Girls are frivolous and sappy. They care too much about shoes and frills and vampires who sparkle in the sunlight. They’re manipulative and emotional, but they’re also weak, throwing, running and crying like girls. “Girl” is an accusation that’s used against boys to humiliate them. And the absolute proliferation of this in sitcoms, movies, books and pop culture has resulted in 50 per cent of the world internalising the idea that not only are they somehow less than their male counterparts, they also occupy a state that’s shameful and gross.

Maguire recalls when, in an attempt to ingratiate herself with her male peers in high school, she made a snide joke about one of her female friends, and was rewarded for it. “ ’You,’ they told me, ‘are just like a bloke.’ It was the most wonderful compliment I had ever received and [it was] reinforced every single day when I heard the things people said about girls … the simple, contemptuous way that almost everybody – kids, teachers, even members of my own family – used that word, ‘girl’, as the ultimate insult.”

Taking up arms against the demonisation of girlhood isn’t about reclaiming our right to love lipstick or dresses or have the occasional conversation about Ryan Gosling’s bottom – although those things are all perfectly fine. The fierce determination to distance ourselves from anything perceptibly “girlie” only furthers the stereotype that women who like “girlie” things are stupid and one-dimensional – and indeed that girlieness itself is stupid and one-dimensional. Some girls – like me – rejected boys’ toys entirely as children, loved pink and watched movies about high-school girls falling in love, yet they still grew up to be strident feminists. We’re all different.

I’m not ashamed of being a girl. Girls are, by turns, any number of the following: strong, infuriating, courageous, smart, weak, stupid, kind, cruel, ambitious, thoughtful, vapid, charismatic, delightful and any variation on any other adjective you could possibly think of. I choose to believe this because I know that girls are every bit as complex and nuanced as boys, and they deserve be treated as such regardless of which toys they played with as children, or if they think camping is a bit gross.

Besides, you can’t make your Tonka trucks have sex with each other. Where’s the fun in that?

If you enjoyed this post, you may also enjoy a post I co-wrote with Nina Funnell: Barbie’s not an issue if girls can think for themselves.

5 thoughts on “Betraying Our Girlhood”