I am feeling pumped after this week’s national Pull the Pin protests against the glitzy, sexualised child beauty pageants as seen on “Toddlers & Tiaras”. This type of competition is heading to Australia if American company Universal Beauty goes ahead with its July pageant in Melbourne. Tuesday’s protests were our way of saying “This is not going to happen on our watch”, as I told Kerri-anne.

I was honoured to speak at the Sydney protest in front of Parliament House and was thrilled to see that so many people want to protect little girls from being primped, waxed and fake-tanned to look like women, then sent out to be judged against an incredibly narrow, limiting definition of beauty.

Pull the Pin, the movement created by Enlighten Education’s simply amazing Catherine Manning, would like to see child pageants banned. So would I. And so would the Royal Australian and New Zealand College of Psychiatrists’ chair Phillip Brock. He says that placing girls in pageants could lead to anxiety and depression because:

Infants and girls are objectified and judged against sexualised ideals. The mental health and development consequences of this are significant and impact on identity, self-esteem and body perception.

When will the government listen?

We know the pageant organisers won’t. They’re making too much money out of the toddler equivalent of the compare-and-despair game women know all too well. This is big business — two words that should never be seen in the same sentence as childhood.

Case in point: Eden Wood. The six-year-old US pageant contestant who is being used to publicise the Universal Royalty event is promoted as “the prettiest little girl in America”, but The Sydney Morning Herald dubbed her “Little Miss Pricey” when her agent said it could cost up to $20,000 for the paper to interview Eden. Annette Hill, the founder of Universal Royalty, wanted $5,000 to be interviewed.

It breaks my heart to look at the pictures of Eden Wood on her Facebook fan page. In many of them, she has been heavily Photoshopped. In some, it isn’t just that she no longer looks like a child but that she doesn’t even look real any more.

can be interpreted as alluring and appealing to the sexual instincts of the observer, and if that observer is an adult then it’s voyeuristic.

Some supporters of child pageants expressed concern that children went to the rallies. Girls and young women have the right to express their opinions and make their voices heard. That some school-aged girls chose to come at lunchtime to show their support is a testament to just how passionate girls are about protecting their younger sisters from being forced to become too sexy too soon and to be judged on their looks. One Year 12 student attended the Sydney protest to conduct research for an assignment, as did a university student. Susan Moretti, whose 17-year-old daughter goes to a school Enlighten has worked with for years, sums up the deep protective feelings of many teen girls:

I just had to calm my daughter down . . . she’s so outraged over this! It’s been talked about at school and ALL the girls feel so badly for the little ones who are cajoled to enter the pageants. I think they may even start a rally of their own by the sounds of their sentiment!

Thank you, everyone who showed their support at the rallies in capital cities around the country. In Sydney, we even had a great-grandmother stop by to thank us for saving her great-grandchildren. The two policemen on duty at parliament house were both dads and they were behind us 100 percent. It seems that we had a lot of Sydney dads on our side: as two men in suits walked by, one of the organisers, Jenn Lane, overheard them saying they would never want their young daughters to be in beauty pageants. A member of a Muslim women’s group in western Sydney came along and offered to involve her community in the movement in the future. The rallies helped to publicise the issue, with media all over the country covering it, including Channel 10 news.

We need to keep up the pressure and keep spreading the word. One way in which you can be heard is by signing the online petition here:. As I so often say, the standard we walk past is the standard we set. Let’s not be complacent.

I always think laughter is one of the best ways to get a point across, so I’m passing on this gem that a friend forwarded to me: 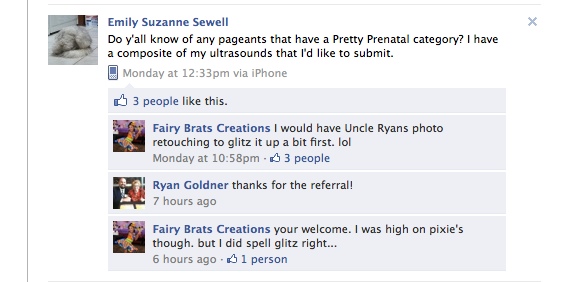 And if you haven’t seen Tom Hanks’s send-up of Toddlers & Tiaras yet, you just have to watch it. Even a pageant parent would have to be made of stone if they can keep a straight face watching the “Miss Ultimate Sexy Baby” contest. Who knew Tom Hanks could sashay like that?

12 thoughts on “Babies, not Barbies! Sand pits, not glitz!”