The internet isn’t just making us dumb, it’s making us angry. And it is women who are among the fastest adopters for venting their rage online.

There’s plenty of fodder to fuel righteous female fury. There’s the social and political structures that contribute to violence against women, the gender pay gap, and a lack of autonomy over reproductive choices for a kick-off.

Then there are the domestic battles over who does the majority of the housework, or who shoulders the most responsibility for parenting.

There is also the more personal anger experienced by women who feel they do not fit into our increasingly narrow definition of beauty, or who feel they have become invisible as they age.

Embracing the full spectrum of feelings is healthy, and there’s certainly nothing wrong with anger per se. Put simply, as it was in the Pixar film Inside Out (a children’s movie that explores the importance all the various human emotions have in our lives) “Anger cares very deeply about things being fair.”

Yet is choosing to express this care only through rage good for women long-term, or indeed for bringing about the changes we so desire?

Anger can be a useful mechanism for blowing off steam, or for rallying those who feel similarly to move into activism. And it can certainly help garner attention.

Just as the shouting, desk-throwing student ensures they get more attention in class than their more considered classmates, studies have shown that angry tweets are almost three times as likely to be retweeted by others, opinion pieces that lean heavily on rage are more likely to go viral (which is why so many politicians and media commentators trade in outrage), angry Facebook posts are more likely to be engaged with (even if the engagement is merely to attract a red-faced angry emoticon: instant ire).

It can also feel like an act of revolution for a woman to express anger, particularly as there is a longstanding tradition of attempting to silence or mock hostile minority voices. Why shouldn’t we women exercise our right to roar?

There are definitely times when we should. But perhaps it’s time to at least acknowledge that there is a price being paid for using rage as the default weapon in our armoury, and to explore other methods of expression and persuasion too.

Unmanaged anger takes a toll on the health and wellbeing of both genders. Some of the health implications associated with this include high blood pressure, headaches, insomnia, increased anxiety and depression (although it is important to recognise that others live with these very same health consequences because they’re forced to navigate oppressive environments).

Anger can also do more to alienate others from an idea than it does to draw them in; it tends to build more walls than it does bridges.

Change-makers know that the key to winning minds and hearts long-term is through the sharing of personal stories that help build empathy, the use of humour (Scott Weems, a cognitive neuroscientist and author asserts that “Humour is a great way for us to have evolved so we don’t have to hit each other with sticks”) and through using shame-free language that fosters connection, rather than distance.

Dr Natalie Ferres, Chief Connection Officer at management consultancy Bendelta, argues that in fact the way to change people’s minds is not to inundate them with anger as this only solidifies tightly held beliefs: “Coercion doesn’t connect.”

While few in power have ever given it over simply as they were asked nicely to do so, nor do they usually hand it over when they are shouted at either. It seems in our rush to be heard, we may have forgotten that it is not always he (or she) who yells the loudest that ultimately wins.

We may have forgotten too that there are many different ways to be a woman of influence.

This post was originally published in The Daily Telegraph, 15/7/17. 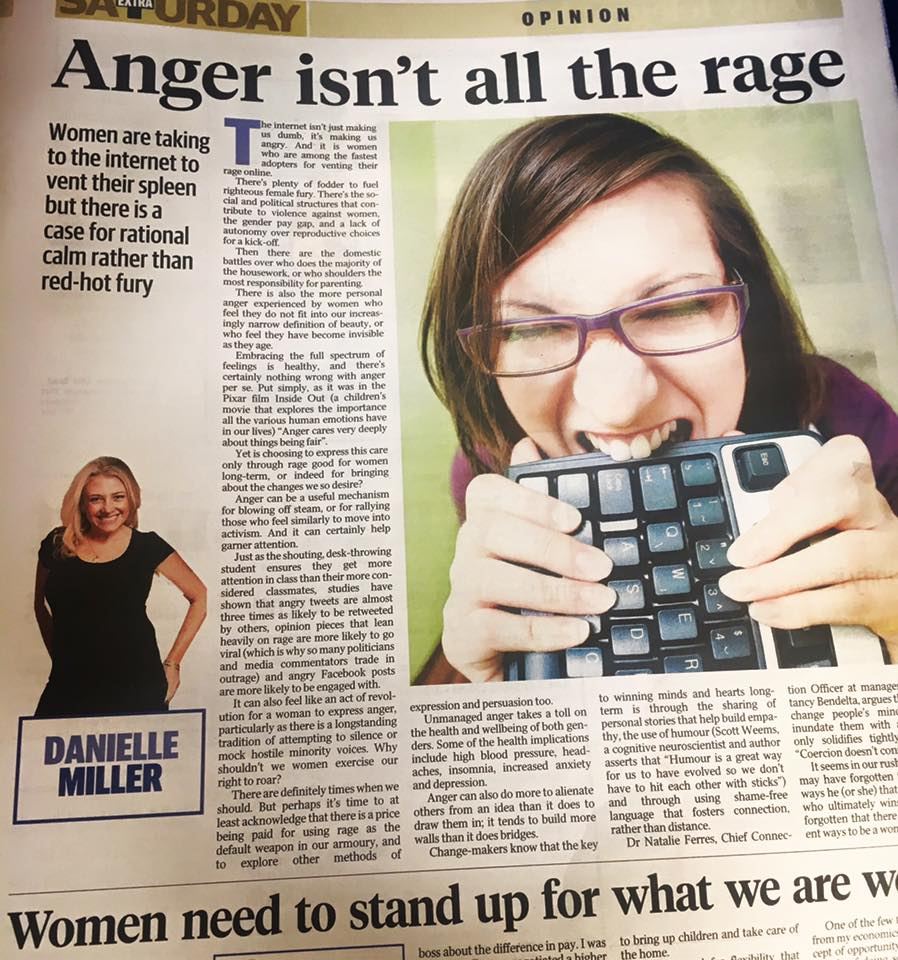